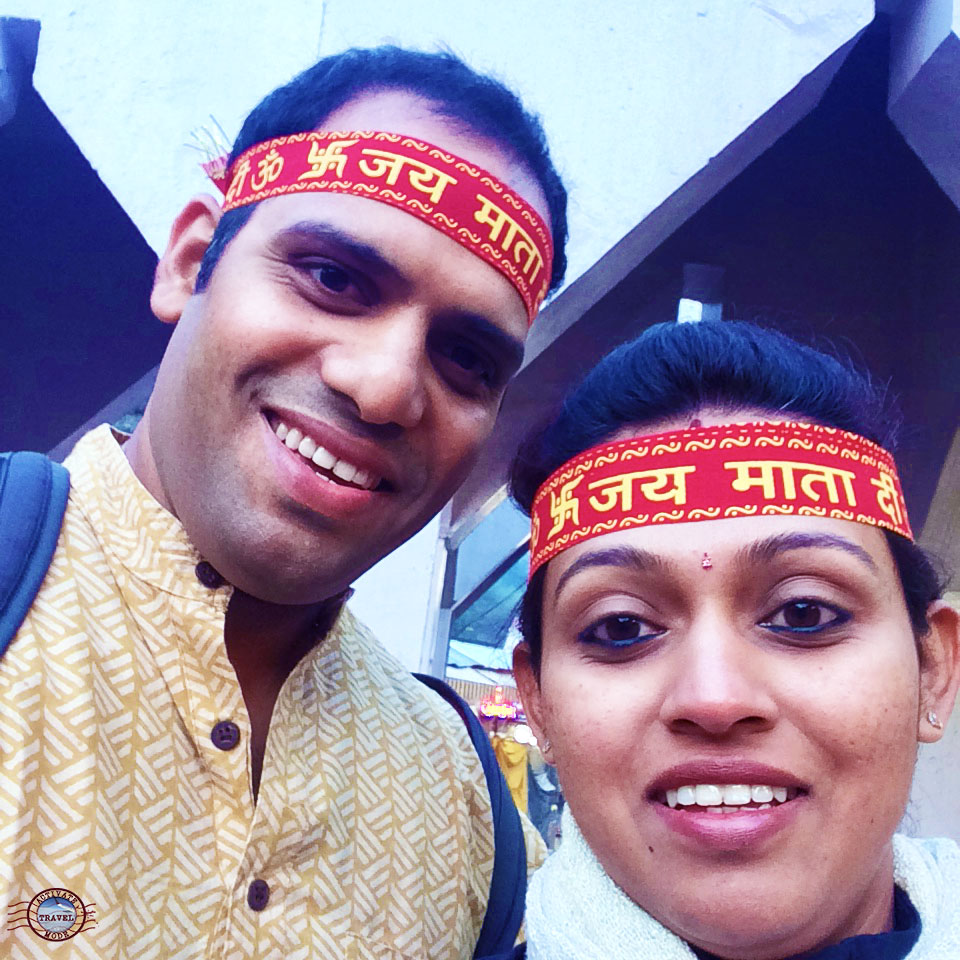 So there is this tradition in India that as soon as you retire you should go on pilgrimage. How bizarre is that! I always told my husband I don’t believe in this and don’t want to live my life with that thought. Shouldn’t we explore places when we are young and fit?

That’s how Katra really happened, I wanted to break this thinking. But there is also a saying where Mata (Goddess Devi) has to call you, guess this was our calling.

Our journey to Vaishno Devi started with mixed feelings. We were excited about the hike, scared about entering the narrow tunnels and worried with our approach of doing it. But in the end it turned out to be a memorable trip, what more could we have asked for.

Throughout the year the temple is open for pilgrims. It is said the best time to visit would be from March to October. This is also the time when the weather is cooler and pleasant. The place is said to be more crowded during Navratri festival as it is related to Devi. It is also best to avoid between June to September as it is the monsoon during this time making the climb harder and unsafe. December to January the place experiences snowfall, hence not very crowded.

We decided to visit in the first week of March. We wanted to avoid crowd and expected the crowd to increase during school holidays. We were really very lucky as we got no crowd during our hike and inside the Holy cave also we were the only two people.

There are various modes of transport to reach Katra. Many prefer train but make sure you book well in advance. Special trains are also organised, you will be to find out more details on it. There are also various Jammu and Kashmir state road corporation buses, check bus timings and plan accordingly. If you are looking for comfort then private deluxe buses are also available. Private cars are another option, but this really depends where you’re coming from.

We had chosen the flight option. From Jammu airport we had hired a private taxi to reach our hotel. It was one hour and thirty minutes journey which we didn’t struggle much given our road sickness. The private taxis were easily available.

Within Katra to reach the temple again there are lots of options available. There is helicopter option which most hotels can organise for you. It starts at the foot of the temple and takes you up to Sanjhichatt. There is also online bookings done to avail the helicopter trip.

If you are planning to walk up to the Holy cave make sure you are able to do it. It is roughly 14.5 km and the climb is very steep. For those who struggle walking there are also “Palkis” (palanquins), ponies and porters available. These are locals who have an identity card which get renewed every year. They have a fixed rate which is available on boards or information desks throughout the climb.

We wanted to choose the walking option as we both love to hike. The climb was very steep and very tiring. On reaching the top there is a sense of achievement, it’s like you were helped by Mata to achieve the unachievable. Many of our friends and relatives who had been to the place were shocked we completed it in three hours and thirty minutes. We started very early as a result we didn’t experience any crowd and were very lucky to be the only ones inside the Holy cave. The walk back down was bit scary due to the slope. I preferred taking stairs wherever possible instead of the slope.

WHERE WE STAYED IN KATRA

We stayed at Hotel Shree Hari Nivas for 2 nights with room only option. This is a very simple hotel which was clean and had friendly staff. We didn’t expect anything fancy while booking the rooms online, only wanted cleanliness and we got it.

We had tried their food as well and were happy with it. They also drop you to the start of the trek up on request. Overall we were happy with the hotel and would definitely recommend it.

THINGS TO DO IN KATRA

Legend has it that Mata Maha Kali, Mata Maha Lakshmi and Mata Maha Saraswati had pooled in their collective strength to create a beautiful girl. They wanted her to live on earth and hence took birth in a house in Ratnakar where their devotees stayed who named her Vaishnavi. As She grew She was hungry for more knowledge and then realised if She meditated would achieve Her objective.

During Lord Rama’s exile Mata recognised Him as Lord Vishnu’s incarnation and asked Him to accept Her. However since that was not the right time Lord Rama said He would return. Keeping to His word He did come back as an old man but Mata didn’t recognise Him. He then told Her in the future when He is reborn as Kalki, She would be given the powers. He asked Her to keep mediating  and asked to help the poor and the needy only then would Lord Vishnu would emerge her into himself.

People from all over the place came to Her for help and She healed them. That was the stories which is still told in the place. The rest of the stories are told in the various places you pass through your journey up to the Holy Cave.

There is currently a management board who looks after the whole shrine. They have now built many facilities and tracks for pilgrims to use during their visit to the shrine.  However before all this there used to be an old track where there were unpaved tracks, few stairs for climbing leading  to the Holy cave.

We used the old tracks to reach the Holy cave. The climb was not easy, slippery at some spots, no properly railings to hold while climbing stairs and covered with bushes. But personally we felt the route was shorter and with proper precautions easily manageable.

During our visit this place was under construction. There was a pathway at the back which showed the original spot which we went and visited. It got this name because of its view of the Trikuta Parbat (mountain) at a height of 2800 feet above sea level. This is also the start of the journey to the Holy Cave.

This is said to be the place where Mata Vaishno Devi had met Pandit Shridhar as a child.

Many pilgrims before visiting the Holy cave bathe in the Ban Ganga. The name “Ban” means arrow and “Ganga” stands for the sacred river Ganges. It is said when Mata Vaishno Devi was on her way to the Holy Cave She used an arrow to create the flow of water, hence the name.

The name is translated to “The Eternal Virgin”. It is said when Mata Vaishno Devi was a small girl She had escaped inside this womb shaped cave for nine months to meditate. By passing through the cave a person’s sins are cleansed. We explored this place on our way back from the Holy Cave.

This was the scariest part of the journey, entering the narrow cave was more challenging than the hike itself. Having a husband who is claustrophobic and huge put us in doubt. We did eventually do it, believe me it was scary for me as well. The start of the cave is very broad, as you end it gets narrower. Once you are in, there is no turning around as it’s all filled with people behind you. The only way out is to crawl and pass through the womb shaped tunnel.

There is a legend in this place, once you make up your mind to take the step rest Mata will help you complete it. This came true in my husband’s case, he made up his mind and the rest till date he sits and thinks how he completed it.

This is the ultimate destination every pilgrim ventures to. The Bhavan can actually be seen from 1.5 km down. It is said most pilgrims although very tired, legs sore find the last 1.5 km the easiest to do. We were one of them, just when we saw it we completely forgot our shaking legs.

The Holy Cave is said to be the place where Mata had revealed herself manifesting Her three forms namely Maha Kali, Maha Lakshmi and Mata Saraswati. It is said that from Arudhuwari Cave after Bhairon Nath had located Her, She headed towards the Holy Cave. From the Holy Cave She had used Her Sword with such power to behead Bhairon Nath. His head that fallen to where the Bhairon Temple is now seen.

We were again very lucky, inside the Holy Cave we were actually taken to the old path. The walk was through narrow tunnels, where we also felt the water flow through our feet. There are actually two paths, one is where Mata originally sat and other is built to use when it’s crowded. At that time we didn’t know this, but not everyone gets to go inside. Both paths ultimately comes to the same place. Our exit was from the other path.

Bhairon Nath was sent by Lord Rama to keep an eye on Mata Vaishno Devi. However he started to grow interest in Mata and upon anger Mata had beheaded him. Later however she regretted her actions, forgave him and granted him a boon that every pilgrim has to visit his temple in order to receive Her complete blessings.

During our visit the roads were under construction and many were using ponies to reach the temple. We had continued with our hike and although the road were slippery they were easily do able. Now I am told by our relatives the place is well paved and looked after.

This place has gone through a lot more development since our visit. It is a small plateau which is two and half kilometres to the Holy Shrine. There is a new Helipad also built here making the Helicopter service from Katra to Sanjichhat possible.

Since we took the old track we didn’t really get to see this. Himkoti is found in the new track, 2.75 km from Adkuwari. It is said to have a very scenic view of the valley. There are no particular stories attached to the place. It was built by the board for resting during the hike. Should you choose the new track I would advise checking out the views from this place.

Charan means feet, it is said that Mata’s feet are imprinted on the rocks here. It is 1.5 km from Banganga and is said to be at an altitude of 3,380 feet. Pilgrims touch the rock of Mata’s feet before starting their climb to seek Her blessings in the journey.

The place is filled with small stalls where locals are selling souvenirs, offerings and sweets. Plenty of places to pick from throughout your hike. It was a different kind of shopping street as compared to our usual travel. I was able to take back a small part of the place back home to our friends and relatives. Personally I found the locals very friendly, eager to sell their stuff with a humble attitude.

OUR ITINERARY IN KATRA

Took a flight to Jammu and then hired a private taxi to the hotel. Checked in at hotel and rested. Evening went out for a stroll and enquired about our trek to the temple for the next day.

Hotel taxi dropped us to the entrance of the temple. Started our hike up to the temple. As we walked we covered most of the spot. On the way down stopped in the shopping street to buy souvenirs and sweets to take back home. Walked back to the hotel and rested.

Morning checked out from the hotel. Took a private taxi to Amritsar.

THINGS TO NOTE IN KATRA