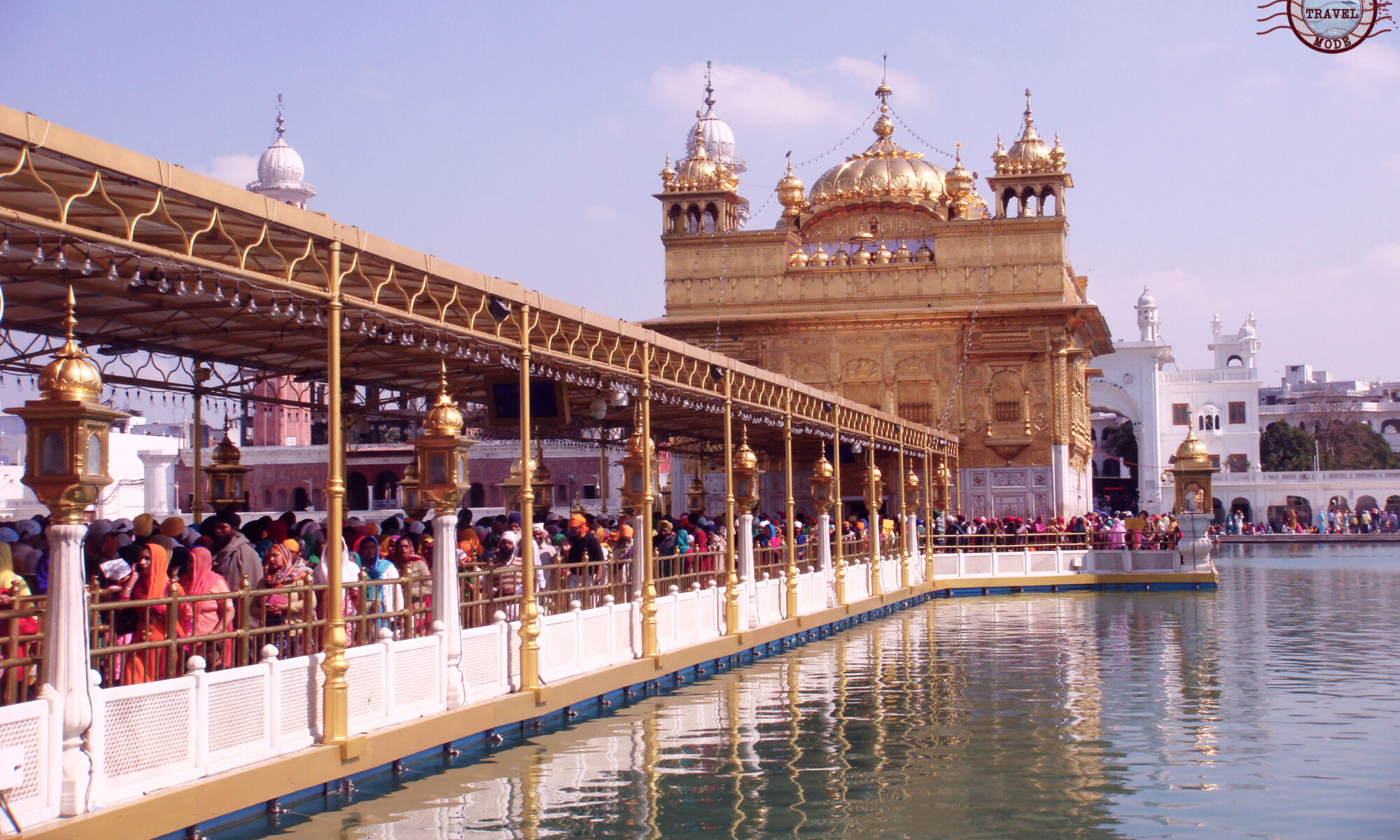 In the north western Indian state of Punjab which is also 28 km from the border of Pakistan is the most visited place- Amritsar.

Growing up watching Bollywood movies there was an image which was created every time Amritsar was mentioned. It would always start with the view of sunflower fields, then move on to the beautiful Golden Temple, the mouth-watering North Indian cuisine and the warm and friendly locals in their traditional Punjabi outfits.

During our drive just when reaching Amritsar we were welcomed by the yellow and lush green  sunflower farms. We did see the divine Golden Temple where every day there were food being served with equality. Walking along the streets of Amritsar we saw locals laughing and having a friendly chat. Enjoying a meal in the “Dhaba” (roadside food stall) made every meal taste like home food.  Everything I had seen and heard about the place in the past I got to witness with my very own eyes.

Throughout my stay here a smile was there, knowing I was not wrong in wanting to see this place.

If you are visiting Amritsar for the Golden Temple then keep in mind the place is always filled with people. There are locals and tourists which visit 365 days hence picking the best time when there is no crowd is really not possible.

November to March is considered to be the best time to visit. The weather is pleasant and you can roam around in the streets of Amritsar.  During winter it gets really cold and in the monsoons it rains heavily. Based on your preferences I would recommend planning. Personally I would avoid the monsoons which is from July to October.

Our visit was planned in March and we were very happy with our decision. The weather was pleasant and we didn’t experience much crowd. The Golden Temple and Wagah border was crowded but then again we had expected it.

There are various mode of transport to reach Amritsar. Everything depends on where you‘re coming from and how long you’re willing to spend on travel.

There are trains running from most of the major cities to Amritsar. There are also various buses to choose from. Flight is another option should you want a faster mode of transport. Lastly there is also the option of self-driving or hiring of private cars.

Ours was a combination of private car and flight. While getting to Amritsar we were traveling from Katra hence we had chosen private car. It’s a long journey of roughly 5 hours. We started early to avoid the traffic and felt the overall journey wasn’t that bad. While returning we had opted for the flight to return home.

Within Amritsar we had used a combination of car, rick and foot. There are also Uber now hence you can always book your ride using the app. Overall we didn’t struggle with the public transport, everything was easily available.

WHERE WE STAYED IN AMRITSAR

We stayed at Hotel Sawera Grand for two nights and had chosen the room only option. Our room was clean and spacious with the necessary amenities provided. The staff were also courteous and happy to help at all times. The main reason for choosing the hotel was its location. The hotel is right in the market and walking distance to The Golden Temple. We were initially scared about the location but on venturing out we did find the neighbourhood safe.

I would recommend doing the home stay in Amritsar. Many houses are there and they do provide an insight to their life.

THINGS TO DO IN AMRITSAR

Although there are many things to do in Amritsar we only choose the below as we were more keen on it.

Harmandir Sahib means “abode of God” and is the spiritual shrine of Sikhism. Sitting in between a man-made pool with a mixture of Indo-Islamic Mughal and Hindu Rajput architecture is The Golden Temple. The minute you set your eyes on it your mind is calmed with the serenity of the place.

The sanctum is two-storey with a gold foil dome. The pool it sits on is called “amritsarovar” (meaning Amrit for nector and Sarovar for pool). The sanctum is connected by a pathway which is called “Darshani Deorhi” (Darshan door). There is also bathing in the pool which is believed by the Sikhs to have restoration powers and purify one’s sins. The pool is said to be maintained by volunteers who drain it periodically.

The upper floor in the sanctum has galleries which is connected by stairs. Unfortunately during our visit it was closed. The ground floor which has white marble is where the Sikh Scripture Guru Granth Sahib is seated. The doors are made from cooper sheets which is covered with gold foils. The ceiling of the upper floors is decorated with jewels.

In front of the sanctum is the “Akal Takht” (meaning throne of the Timeless God) building. It is the headquarters of the main political party of Indian state of Punjab. The Akal Takht issues orders on matters relating to Sikhism.

You can also see the Ramgarhia Bunga and Clock tower inside the premises. The red sandstone minaret with two high towers was built in the 18th century honouring the Sikh warriors from the Afghan attacks. The watchtower was built to keep an eye on military raid approaching the temple and its surrounding.

There is also the Guru Ram Das Langar, a community-run free kitchen and dining hall. It was nice to see visitors regardless of their faith, gender or economic background all siting together and enjoying a meal. The locals volunteer in preparing the meal and feed with great warmth.

Having always wanting to see the place while actually standing there I was in total shock with its beauty. We saw it during the day and also during sunset.

During the day the temple is reflected on the pool making a memorable sight to remember upon entrance. In the evening we loved watching it, the sun setting and the temple changing its shiny colour.

We sat there and enjoyed the tranquility the place had to offer. It totally explained why there are so many visitors throughout the year. Unfortunately they have not been able to declare the place as UNESCO as decision is still pending.

It is an historic garden and also a memorial place for Amritsar. In memory of those killed during the Jallianwala Bagh massacre on the festival of Vaisakhi on 13th April 1919.

The “Martyrs Well” has a large structure  called the Martyr’s memorial which was said to have 120 bodies that were recovered from the well. There are also number of bullet holes which are still preserved in the walls. As you walk you will see number of plaques throughout the place each sharing a part of the stories of that day.

The Martyr’s gallery and museum shows pictures and more stories in relation to the day. Newspaper clippings and letters from that day are kept on display showing the massacre.

For me personally it was a very sad place to visit. All the stories displayed for some reason made my heart sink. However it’s nice to see things are still remembered about the place.

Wagah is a village which is located in Wagah Zone of Lahore Punjab, Pakistan. The border is actually 24 kilometres from Lahore and 32 kilometres from Amritsar. The place is famous for Wagah border ceremony and is popular place for visiting with the locals.

In the evening there is the flag lowering ceremony and border crossing which takes place. We also got to see the gates between the two countries open and have the marching done by both Pakistan Rangers and Indian Border Security Force. The crowd is also given a chance to march/run with the flag.

The whole atmosphere is beyond words, every Indian in some way can relate to the emotions they have towards their country at this place.

OUR ITINERARY IN AMRITSAR

Traveled in a private car to Amritsar. Checked in to hotel and rested. In the evening took rick from the hotel to Golden Temple and enjoyed the evening and night view from out. Walked back to the hotel.

Morning had breakfast and walked to The Golden Temple and visited it from inside. Then hired a taxi who took us to see Wagah Border. Enjoyed our time in Wagah border. Taxi dropped us back to the hotel.

Checked out from the hotel. Walked to see Jallianwala Bagh and enjoyed the place. Took a cab to the airport to take a flight back home.

THINGS TO NOTE IN AMRITSAR