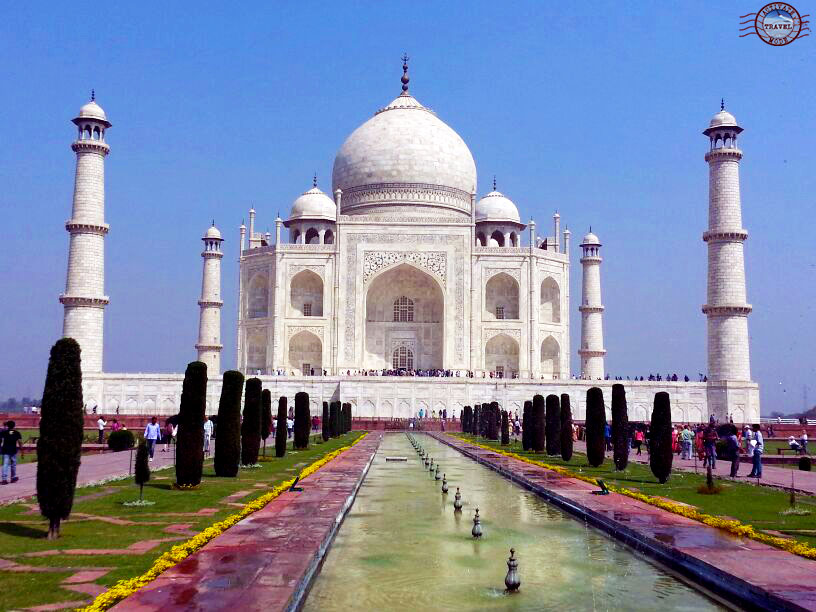 Visiting one of the seven wonders of the world – Taj Mahal was on our bucket list for a very long time. We had decided in order to really do justice to the place we will dedicate our entire trip to just one thing.

We planned to visit this beauty in the morning and at night. Each time we saw it we were in total awe of its beauty. Every time of the day it looked pretty and with every different lights we were in love with it.

The ivory-white marble mausoleum was built by 20,000 artisans under the guidance of Ustaad Ahmad Lahauri. Mughal emperor Shah Jahan had commissioned the tomb of his favourite wife Mumtaz Mahal, later after his death had his own tomb as well.

The first thing you see is the huge brown door (darwaza) as the entrance to the Taj Mahal. The first sight itself gives the Mughal feel and gets your mind excited to what you are about to see. The door is huge with a lot of work put into its making. The top of the door has 12 domes framed with two masts. It’s made with red stones and white marbles, already showing its guarding something precious.

Then you get to walk through the courtyard (Jilaukhana). There are said to be 3 gates namely South, East and West gate. The main reason for the courtyard it is said that in Shah Jahan’s mind he wanted the visitors to have a place to get off from their rides and prepare themselves for what is up ahead. In due time this place also has various mausoleums here which is said to be of his various wives and children.

The gardens (Chahar Bagh) is the next thing you pass upon entering from the courtyard. The garden is square and is divided into four pieces. During our visit the whole fountain wasn’t on hence we could clearly see the reflection on the water.

During the 17th century it was believed a garden represents happiness and water was considered as a symbol of life. Along with this there is also the Cypress tree which is said to be symbol of mourning in the Muslim tradition.

After passing through all this you get to see the mausoleum up close. Taj Mahal means “crown of all places” and it truly felt so. It also shows a symbol of a husband’s love for his wife which is still remembered after all those years. The Taj Mahal is a true piece of architecture.

Inside the mausoleum there are 4 main sides. Each having equal amounts of light and a very impressive bulb shaped domes.

The main room also has the cenotaphs of Shah Jahan and Mumtaz Mahal. The place is made from floral marbles and has semi-precious stones.

Each part of the place is created with great care and even after all this years it is well looked after.

There are four minarets which are 40m high and each is divided into separate balconies.

The mirages are around the mausoleum and the tilt slightly outward if you see properly.

Taj Mahal for me was always one of the places to visit in my bucket list. I had very high expectation before my visit. I have to admit I was truly not disappointed in watching the beauty of the place. After all this years the whole place still show a symbol of love.

Taj Mahal is such a place where there are visitors throughout the year. Picking a best time to visit when there is less crowd is next to impossible.

Due to the fogs during winter it is said November to February should be avoided. March to June is said to be the best time to visit. Our visit was in March and we found it too crowded, as expected.

We however decided since this is the only main thing in our itinerary we decided to see it morning and at night.

We also wanted to see the beauty of the place at night. Hence we decided to do the night visit. The night visit is usually happening on the full moon nights. Since it is in small batches (50 people) we were able to see the Taj Mahal at night without crowd. The moonlight shining on the white marble mausoleum was a sight you will never forget once you experience it. We had especially planned our trip taking this into account. In the night visit you don’t get to go all the way to the mausoleum but still it’s worth it. I would recommend this.

We had taken a flight to Delhi and from Delhi we had hired a private taxi and done a road journey to Agra. The road journey was tedious, with not good roads in some parts. We had taken a small halt in between to avoid the continuous journey.
However while returning we had used the Yamuna express, it was faster and the roads were very well maintained. We weren’t too tired during our return journey and didn’t even take any halts.

There are also train options to Agra and various bus options from various places. Depending on where you’re coming from I would advise deciding.
During our visit Delhi was the nearest airport but now Agra has its own airport.

Within Agra we had actually used the rick. Most of the time the Taj Mahal was walking distance from our hotel so we walked but during dinner times or for other areas we used the rick. Personally I didn’t feel there was clarity on the fares, at times they would take more. If we were doing back and forth in the same place we asked for fares and got a rough idea. I wasn’t too happy with the way it worked but didn’t use much so can’t really complain.

WHERE WE STAYED IN AGRA

We stayed at Hotel Taj Resort for 2 nights during our visit to Agra. This hotel felt ideal as it was walking distance to the Taj Mahal. From the rooftop there is also an awesome view of Taj Mahal. We had first seen the Taj Mahal from here. We had enjoyed evening dinner at the rooftop restaurant and with the Taj Mahal view in the background it was a memorable experience.

We were very happy with the hotel rooms as well. Everything was clean and the basic amenities were well provided. The hotel staff were also very polite and always answered every question with a smile. We didn’t use the breakfast option so not fully sure how they were. Personally I would recommend it.

OTHER PLACES WE VISITED DURING OUR TRIP TO AGRA

To take a break from our long journey to Agra we decided to visit the Vrindavan temple in Mathura.  The city itself which is the birth place of Lord Krishna we didn’t visit.

The temple is very famous and usually has millions of visitors. During our visit it was Holi (festival of colours) hence we experienced lots of crowd. The temple itself is very pretty and the chanting of mantras gives it a divine aura.

In 1638 this was the main residence of the emperors of Mughal Dynasty. In 1983 UNESCO inscribed it as World Heritage Site. Upon seeing the place at first glance it’t huge, as is any forts in India under the Mughal history.

There are two gates namely-Delhi Gate and Lahore Gate. After entering your eyes are welcomed with the red sandstone and white marble contrast.

It was built under Akbar and later more changes done in Jehangir and Shahjahan’s command.

This is also said to be the place where Shahjahan was imprisoned by his son and he would sit from his prison cells and see the Taj Mahal. Opposite to the banks of the river Yamuna you get to see Taj Mahal at a distance.

Inside the fort there are lots of structures like the Jahangiri Mahalm Diwan- I- AM (Hall do Audience), Jahangir Palace, Diwan-i-Khas, decorated column, decorations on the ceilings, Musamman Burj and Shish Mahal to name a few.

Another place which is always filled with tourist. Besides the crowd I thoroughly enjoyed it and would recommend visiting.

OUR ITINERARY IN AGRA

We had taken the early morning flight to Delhi. From Delhi we had hired a private taxi to Agra which was roughly 3 hour drive. In between our road journey we had also visited Vridavan Temple in Mathura. Reached the hotel and rested. At night visited the Taj Mahal for night viewing.

Traveling tip: now there are flights directly to Agra, road journey can be avoided.

Early morning had breakfast and went to visit the Taj Mahal. We then visited the Agra Fort by rick. Back to hotel and enjoyed night view from the rooftop restaurant.

Early morning took a private taxi on road back to Delhi. Took a flight from Delhi to get back home.

THINGS TO NOTE IN AGRA