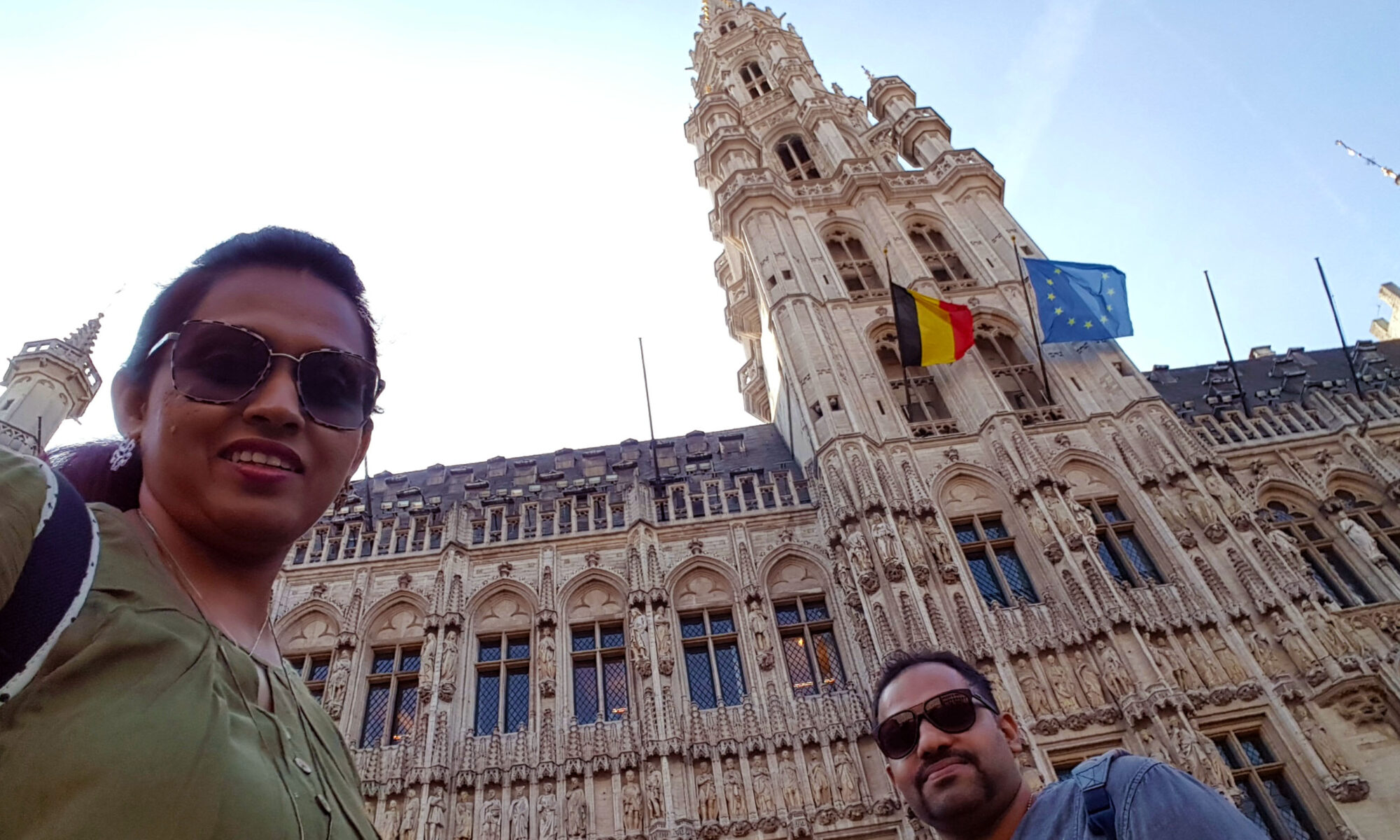 What happens when you have all the chocolates and waffles in every corner of the street to enjoy whilst husband is trying out the beers? Well, you end up having two happy travel couples – Brussels did that to us.

Brussels is said to be the capital of comic books, fries, beers, waffles and of course chocolates!

Brussels really was magical! Walking along the narrow cobble stones streets we were smiling along as if we were in our next door neighbourhood. The locals were so friendly, always ready to help us with a warm smile.

Friendly place, great food and no set itinerary- Brussels was one such trip for us.

Spring and fall weather is absolutely stunning time to visit Brussels which is between April to June and September to October. July to August is when the weather is pleasant and is also considered to be the peak tourist seasons. You will hear most Belgians often complain about the weather and say its rains most of the time.

Our visit was in September and we were very happy with the weather and the tourist were less. We didn’t experience any rainfall so overall our trip was a good one.

We were traveling to Brussels from Paris hence had chosen the Thalys train option. The journey was for one hour thirty minutes which we booked online with no issues. From Brussels we were traveling to Amsterdam so again we choose the Thalys train. We reconfirmed the bookings at the Central station on the day of arriving. The travel time to Amsterdam was roughly two hours. In both places we had chosen early morning. Overall we had no bad experience with the train travel and were very happy doing it this way.

Most of Brussels transport is organised by STIB. There are metro lines which connects the eastern to western city and Pre-Metro which includes trams. There are 4 metro lines and various buses and tram services which help you reach your destination.

Waterbus are also there should you wish to travel between Vilvoorde, Van Praet and Brussels. Then there is also the bikes, taxis and car rentals to choose from.

We had chosen combination of walking, metro, tram and bus. Walking and exploring the place will always be our favourite and Brussels didn’t disappoint. We had chosen the single-fare ticket and overall didn’t struggle with the travel. With a map and bus timings everything went on smoothly for us.

WHERE WE STAYED IN BRUSSELS

We stayed at Floris Arlequin Grand Place Hotel for two nights with breakfast plan. Our main reason for choosing this hotel was because of its location. The hotel is few minutes walk from Central station and is located in the middle of city centre. The metro is also nearby which made our travel within Brussels a lot easier.

The hotel is located in the small streets just behind Grand Place. Since it’s in a busy area we were worried about the noise. But we were pleasantly pleased with how quiet it was in our rooms. The rooms were also clean and the staff were also friendly.

We had chosen the breakfast option and were happy with the variety provided. It also had a wonderful panorama view in the breakfast area and at night we could so the well lit Town Hall from our rooms. With an awesome view what’s there to really complain!

THINGS TO DO IN BRUSSELS

A very famous tourist destination which imprints a memorable moment of Brussels. It is said to be the most beautiful square of Europe and hence been the UNESCO World Heritage Site since 1998.

This is in the heart of the city and was also our start to exploring Brussels. Walking along  and letting our eyes wonder to the creativity of the place was something we absolutely loved doing. If this is how the start was we knew we would love our two days here.

Just keep walking and explore the lovely architecture and try out your taste buds along the way. Along the alleys leading to and from the Grand Place there are lots of chocolate, cafes and souvenir shops for every tourist.

You will be happy with how relaxed your day ends up after being here. I would say this was my favourite place in Brussels.

A 61 cm bronze fountain sculpture which has a naked little boy urinating into the fountain’s basin. The original one which dates to 1618 is kept in the Brussels City Museum, this is a replica which was put in 1965.

There are lots of stories being heard about the place, which one is true no one really knows. However, it’s the best known symbol showing the sense of humour of the  people of Brussels.

Although it is only 5 mins from grand place, I personally was a little disappointed with how small it really was. One would easily miss it but the crowd that surrounds the place can easily help you find it also.

A Gothic building where the spire stands tall overlooking the Grand place. The whole place is lit up at night making it look especially very attractive. The building is really an art work, one which really can’t be missed when you visit the grand place. There is said to be a guided tour which helps see the place from inside, we only choose to see it from out.

In the central Brussels there are two main sections (kings & queens gallery) which are more than 330 feet in length. The place has beautiful architecture- the arches, pilasters and windows all well thought out.

Another attraction we loved seeing while in Grote Markt. A very nice place to do some window shopping as things are pricy here.

Dating back to the World Fair Expo 58 which is now turned into a museum. It’s a popular landmark building in Brussels. A very interesting engineering which can only really be understood upon visiting.

It is 335ft tall and has 60 ft. stainless steel spheres where tubes of 10ft diameter connect the spheres. The five spheres for public spaces are connected by stairs, lifts and escalators.

The views from the top are also great. We had visited it during the day, I was told the place is also well lit up at night.

As the name suggest this belongs to the Kings and Queens of Belgians. Now however this is not used by the family. A very nice building with a well maintained garden. A place we could only admire from out as entry was prohibited on our day of visit. There are guided tours in the summer which you can plan should you want to see it from inside.

A beautiful miniature park which shows some of the monuments in the European Union. There are said to be roughly 80 cities and 350 buildings.

Some of the places shows live action models. For someone like us who have still not seen the whole of Europe it was a nice way to take photos in some of the iconic buildings. This place had mixed feelings for everyone, we loved it.

A large urban park where there are many U shaped buildings which are commissioned by the Belgium government.

The centrepiece triumphal arch was erected in 1904 which is built from iron, glass and stone. It is there to symbolise the industrial and economic performance of Belgium.

The park is filled with gardens, ponds, waterfalls, art and history museum, an auto world which holds vintage cars and also the Great Mosque of Brussels. You can easily spend a whole day here.

Another public park which we visited and weren’t disappointed. There are various remarkable trees inside the park along with some historic buildings. We didn’t have any agenda, just enjoyed a lovely stroll around nature.

Another lovely park which we enjoyed during our visit.  All the parks that we visited were nearby hence the walk in nature all seemed very relaxing.  In this park I particularly loved the monumental fountain in front of the Palace of the Nation.

OUR ITINERARY IN BRUSSELS

THINGS TO NOTE IN BRUSSELS