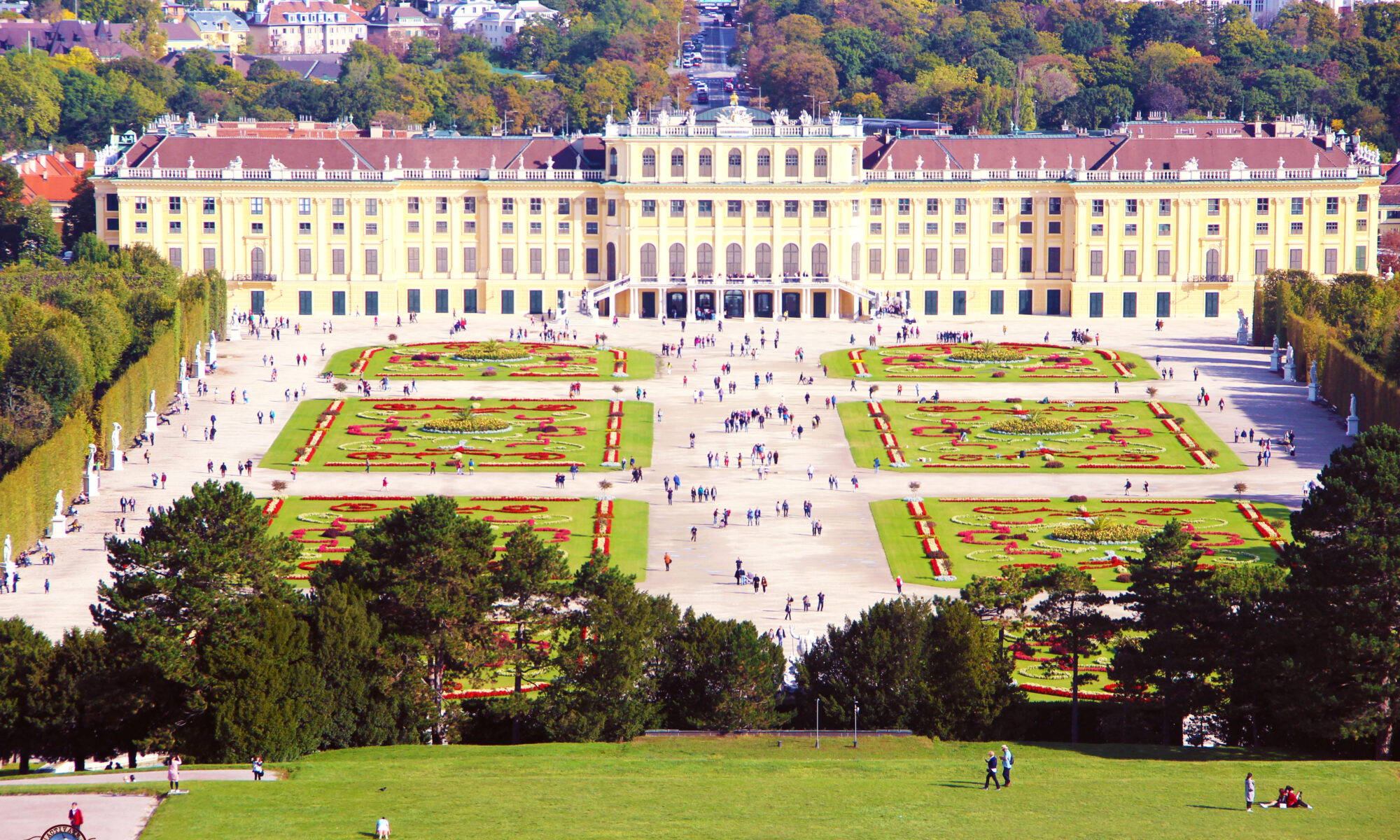 The Austrian capital is screaming with Baroque architecture and imperial history. Another picturesque place which is truly best admired from above. A city with endless museums, palaces, markets, wine regions and restaurants serving delicious food. Walking along the city you witness a glimpse of its history in every corner.

The little time we did spend here we thoroughly enjoyed the enriching cultural experience. Our only regret was we choose this destination as a break in between our long journey. We should really have stayed couple of days more to really do justice to the place.

We had chosen to visit Vienna in October for 2 days and were welcomed by the colourful autumn foliage. Coincidently April to May or September to October is considered to be the ideal time to visit Vienna. When we arrived to Vienna we were welcomed by morning showers but the weather turned out pretty good for the rest of our stay.

For those traveling on a budget might consider not visiting between June and August and December to early January as all prices are high. Winter is ideal if you want to see the amazing Christmas decoration and markets that get set up. Those wanting to enjoy the festivals should consider summer where you can enjoy the place with a pleasant climate.

Personally I don’t think any season would be a wrong choice for Vienna. I would however recommend a longer stay than 2 days to truly do justice to the place.

We had booked the early morning train from Budapest to reach Vienna. The journey was a little less than 2 hours and we had a comfortable travel with no issues.

From Vienna we were traveling to Venice and again choose the overnight train. This was a long 10 hour trip and personally a very stressful one. Throughout the journey I kept worrying about robbery or having our passports getting taken. We did have a fellow passenger who insisted I keep my bag up which worried me even more. Nothing bad happened but was a tiring journey worrying.

During our stay in Vienna we had used the various Wiener Linien public transport available. We had travelled in trams, buses and trains with much ease and comfort. We took a map from the hotel and ventured out. There are 5 underground lines, 29 trams and 127 bus lines. There is the option of buying Single tickets, 24/48/72 hour tickets, weekly pass, eight-day climate ticket or Vienna card. Based on the ticket you choose you have to validate it in the blue machine before every travel. The tickets can be bought from the underground ticket machines, online using the Wiener Linien Online Shop or app and in tobacconists.

There are also taxis and bike rentals available but we never used one. The CityBike spot is where the bikes are rented and returned to.

WHERE WE STAYED IN VIENNA

We had chosen to stay at Ibis Wien City Hotel for 1 night. We wanted to be in the city, close to public transport and tourist attractions hence this hotel fitted perfectly well. It is between two metro lines and buses are also easily available. The place is also close to many cafes and restaurants another win win staying here.

The rooms were typical Ibis styled and we found it comfortable and clean. Staff were also very polite and helpful. Although the hotel is in a busy street we didn’t have any complaints with noise. Since our stay was for only one night we weren’t fussed and happy with our choice.

THINGS TO DO IN VIENNA

A popular street which is geographically in the centre of Vienna. The place is always very busy and it should be as it does have the tallest church in the world! The precinct is also surrounded by cafes and shops to keep you busy and help you relax. Plenty of history is seen in the place, personally I loved spending my time here. Enjoying a ride on the horses and carriages is another way to see the place.

A beautiful Romanesque and Gothic form Cathedral which is built from limestone. The towers are said to be 446 ft. tall which when seen closely has a double-eagle emblem. It is said the colored roofs has 230,000 glazed tiles.

The main entrance to the church is named the Giant’s door. The interior is equally pretty with massive pillars and beautiful stained glass windows. A church which leaves a lasting image of Vienna in everyone’s memories.

Located near Hofburg Palace and the Palace of Justice. Built in the Greek Revival Style with construction getting completed in 1883. World War II did cause a lot of damage but later was restored to its original form. The ends of the roof is decorated by bronze horse tamer. Austrian marble was used in the construction. The building is said to be 151m long, 132 m wide and if you take the tour you will be covering 13km distance. The Pallas Athens Fountain is seen in the front of the Parliament. Another impressive building showcasing Vienna’s beautiful architecture. Unfortunately during our time the place was under renovation.

The name in German means Ditch. During our stroll around the city we came across this popular street. Plenty of shops around along with many monumental buildings. Each buildings having a unique architectural structure to it. Since the place is popular there were many tourist around. Honestly we were so busy enjoying the place that the crowd didn’t bother us. There are also couple of fountains of which I particularly loved the Pestsaule.

The Neo-Gothic styled is house to the office of the Mayor of Vienna and also has chambers of the city. Yet another stunning building portraying Vienna’s history. On top of the tower sits the 103 meters tall Iron Knight. It is said to be one of the symbols of Vienna. A very friendly staff inside who are happy to answer your questions. It is said to turn into an ice skating rink from January to March, unfortunately we never got to witness this.

This Baroque palace was built as a summer residence for Prince Eugene of Savoy. There are two Baroque palace, Palace stables, Belvedere museum and a Baroque park landscape. Walking along the beautiful well maintained garden does make you feel like royalty. We mostly enjoyed the parts which were free and loved it.

Schonbrunn means beautiful spring and it was the main summer home for Habsburg rulers. A UNESCO World Heritage Site with a beautiful French garden.

Plenty of walking to do  and with such a huge property you can easily spend half the day here. Vienna showcases its history everywhere and this place making it the busiest throughout the day. We visited when it just opened and still found it packed.

The ticket to the place maybe expensive especially when you’re pressed with time. But there are plenty to enjoy free of cost also in the premise. Enjoy the beautiful landscape, endless lawns, Greek statues and fountains, well maintained gardens or simply climb the hills to see the city of Vienna as its backdrop.

While walking along the garden in Schonbrunn Palace we came across this 12th century building. It is dedicated as a monument to Just War, that which leads to peace. The triumphal arch, militaristic decors and sculptures makes you appreciate the architect’s work. Visitors are welcome to visit the terrace with an entry fee.

An apartment house which was built by Joseph Krawina based on Friedensreich Hunertwasser’s concept. The place is differed to the usual classical architectural building which you see throughout Vienna. The building itself is not available for visit to the public but there are funky cafe’s around which gives a glimpse. Not everyone may enjoy this place but I loved the quirkiness the place had to offer.

An outstanding Baroque styled church which was completed in 1737. The dome is in form of elongated sphere. The two Roman styled columns on the front gives an image of Greek temple. The details on the pillars were exquisite. We were awestruck by the beauty of the church from both inside and out. I would also recommend standing across the pond to see the reflection of the church.

If you are interested in museum then I would definitely recommend visiting here. The place is filled with modern architecture and has Baroque styled buildings. Since we were limited with time we couldn’t visit the museums. We did read a lot about the place and hence went there with no set plans and simply enjoyed our walk. It’s a small city inside the city which according to locals in December during Christmas is a fun place.

This is actually translated to Heroes’s Square. A large public space in front of Hofburg Palace. There is a lot of history and events which took place in this area. We enjoyed our walk along the area. There are also stunning buildings seen in the area along with many museums.

The official residence and workplace of the President of Austria. Facing the Heldenplatz square stands the 13th century which is initially the imperial palace of the Habsburg dynasty. The place is huge unfortunately we only enjoyed it from outside.

An imposing bronze statue highlighting one of the impactful leader who dominated Austria during the 18th century. It is located between the Museum of Art and of Natural History and has a beautiful park to enjoy a stroll.

At the centre is a large statue of Empress Maria Theresa sitting on the throne with her hand stretched out. Below are the four famous military commanders riding on horses. A beautiful sight which you can plan during your city walking tour.

OUR ITINERARY IN VIENNA

Below map can be used as a rough guide on the walking direction and in finding the nearby subways.

THINGS TO NOTE IN VIENNA